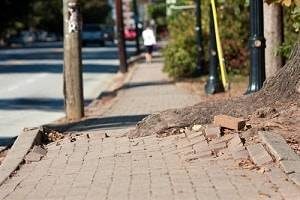 It is notoriously difficult to pursue a civil case against a government entity at any level. The concept of “sovereign immunity” dates back many centuries, and the idea has been codified in several Illinois statutes. In short, lawsuits against the government are handled under a different set of rules than lawsuits against private individuals, companies, or other entities. Sometimes, unfortunately, the principle is applied too liberally, and injured victims are denied their chance to seek justice. Earlier this month, the Illinois Supreme Court ruled that a woman whose case was dismissed in 2013 should have the opportunity to be heard and to seek compensation.

In 2012, the city of Danville, IL repaired many portions of the sidewalk in its downtown area. Later that year, a Danville woman tripped on an unrepaired slab of sidewalk, fracturing her shoulder and suffering other injuries. About a year later, the woman filed a lawsuit in Vermilion County Circuit Court against the city of Danville seeking damages for the city’s alleged negligence. Her complaint claimed that Danville had breached its duty to maintain sidewalks in a reasonably safe condition.

The county court, and subsequently the Fourth District Appeals Court, issued a summary judgment that agreed with the city’s argument that sidewalk slab in question was not repaired due to a discretionary decision by city employees. Under the Illinois Tort Immunity Act, municipalities cannot be held liable for discretionary acts or omissions by employees. Injuries that occur as the result of policy decisions or negligence could leave the municipality liable.

Earlier this month, the Illinois Supreme Court ruled on the matter. The state’s high court unanimously determined that the city of Danville failed to prove that the decision to skip repairs on the sidewalk in question was a discretionary decision. In fact, the city did not provide any evidence of its decision-making process whatsoever. The city also argued that the uneven sidewalk was obvious enough that pedestrians should have been able to recognize the danger and avoid it. The court held that the city failed to prove this argument as well.

The Supreme Court’s decision does not mean that the city is liable for the woman’s injuries. Instead, the ruling gives the woman the chance to bring her case back to county court. Upon consideration of the evidence presented at trial, the lower court could still rule in favor of the city.

Call Us for Help

If you have been injured on public or government property, an experienced Wheaton personal injury attorney can help you understand your options for pursuing compensation. Call 630-462-1980 for a free consultation at Walsh, Knippen & Cetina, Chartered today.